The last 72 Endangered Southern Resident Orcas (J, K, & L- pods) of the Pacific Northwest are literally starving to death. Most crucial to their survival is secured primary food source: Endangered Chinook Salmon, also at critically low numbers. Experts state that breaching the 4 Lower Snake River dams is essential in restoring the Chinook’s spawning habitat. In brief, the energy produced by the 4 Lower Snake River dams could be replaced by a mix of other clean energy sources that are now available at lower cost. Numerous reasons are presented by DamSense.org for breaching.

To watch Q13 News' Simone Del Rosario reports Part 1 of our 5-part special report, "The Last Generation.” please scroll down to bottom of this page.

The government efforts to save the Chinook Salmon and Endangered Southern Resident Orcas are failing and costing billions in taxpayer dollars. There is no need to fund the CRSO/EIS process which would take too long (year 2022!). Let’s take action to have the Army Corps of Engineers to supplement the 2002 Environmental Impact Statement promptly and use Alternative 4 to breach the lower 4 Snake River Dams this year.

You can DOWNLOAD & PRINT our SAMPLE LETTERS by clicking on the links in the righthand column, sign & send.

However, please consider COPY & PASTE of the text with key comments provided below to personalize YOUR OWN more POWERFUL letter to your own letterhead. Please be sure to include the following key comments.

As of August 2019, there were only 72 SRKW remaining, with “Mega” (L41) declared to be missing as of January 2020.  According to your own SROTF, “the status of the Southern Resident population remains critical, with a declining population, a continued lack of prey and ever-increasing adverse impacts from vessels and toxics.” Without adequate food, SRKW are declining in condition, they are more susceptible to disease and adverse impacts from their contaminant loads, their productivity declines, and calf mortality increases.

While efforts need to be expanded and expedited to address the contaminants and noise issues in SRKW habitat, the single most important action to address the food shortage for SRKW is to remove the dams to restore the salmon runs.

The severity of the situation is even more critical when considering the remaining number of breeding SRKW in the population.  Along with people across the world, I was moved by the deeply sad and disturbing news in July 2018 of mother Southern Resident Orca (aka SRKWs) Tahlequah (J35) carrying and mourning her dead calf for 17 days, approximately 1,000 miles; followed soon after by the reported presumed death of 3.5 year old Scarlet (J50).  While it was good to see emergency measures by NOAA to attempt to save J50’s life, we must consider the indicators that scientists have brought attention to for many years.

In August 2019 it was announced that three more SRKWs, Princess Angeline (J17) and Scoter (K35, Nyssa (L84) were presumed dead due to starvation. These current events bring to light how crucial it is to take bold immediate action to prevent this iconic Endangered species from going extinct.

The Task Force failed to recommend the bold action, immediate breaching of the 4 Lower Snake River Dams (4LSRDs) necessary to save these endangered whales while disregarding public input. In its Summary of Public Comments on 9/24 Report, the Task Force notes that the most prevalent comment received, of the 994 total comments relating to hydropower, called for dam removal. Indeed, 36.7 percent— or 365 comments—said “breach the lower Snake River dams,” while an additional 10.4 percent—or 103 comments—said to “prioritize and remove dams in general.”

I am gravely disappointed with some of the recommendations you released, especially your support of Task Force Recommendation 9, for stakeholder process to further discuss the potential breaching or removal of the 4LSRDs. This only delays action that should be taken immediately.

The removal of the four Lower Snake River dams will cause impacts to the energy, transportation, and recreation infrastructure in the region with associated economic consequences. However, according to an economic analysis undertaken by ECONorthwest, “a careful exploration of the range of economic tradeoffs (of dam removal) based on publicly available data suggests the benefits or removal exceed the costs, and thus society would likely be better off without the dams.” Indeed, based on its analysis, ECONorthwest determined that “removing the Lower Snake River Dams will result in a net increase of $505 million in output, $492 million in value added, $408 million in labor income, and 317 annual jobs.”

The government efforts to save the Chinook Salmon and Endangered SRKW are failing and costing billions in taxpayer dollars. There is no need to fund the CRSO/EIS process which would take too long. Army Corps of Engineers can supplement the 2002 Environmental Impact Statement promptly and use Alternative 4 to breach the 4 lower Snake River Dams starting this year. Waddell, Twa and others have demonstrated that the 2002 EIS can be used to breach these dams and they have created Appendix D that would reduce the cost of breaching by $600Million. No new authorities are needed to place these dams in “non-operational” status. The Corps can do so immediately if asked and then begin the process for restoration of the Pacific Northwest ecosystem.

Just as Oregon Governor Brown publicly endorsed the removal of the dams in her 17 February 2020 letter to you, your endorsement of the same bold action would send an undeniable message to the Trump administration, federal and state agencies, tribal governments, and your constituents of the need to restore this important salmon habitat to benefit salmon and SRKW. Such decisive action will also satisfy the diverse tribal interests, multiple other stakeholders, and the majority of the public who recognize that the removal of these dams will provide significant cultural, recreational, aesthetic, ecological, and economic benefits that far outweigh any adverse consequences.

Since people the world over mourned the tragic loss of Tahlequah’s calf in 2018, there is rejoice in every reported sighting of the two calves J-56 Tofino and L-124 Whistle born in 2019. As NOAA on July 27, 2020 confirmed two SRKW females to be pregnant the world watches in anticipation.

The fate of the last 72 Endangered Southern Resident Killer Whales is in your hands. Just as you have become a leader in efforts to combat climate change I hope that you will demonstrate the same leadership in advocating for SRKW, their habitat, tribal interests, and everyone around the world who cherish these magnificent animals.

Please kindly respond to let me know what you will do for the Endangered Southern Resident Orcas.

3) +2 senators in WA state may be personalized.

+ If you prefer to COPY & PASTE to your own letterhead along with comments, please be sure to include these key comments:

"While I am aware of the ongoing Southern Resident Recovery and Task Force, the government efforts to save the Chinook Salmon (primary food source of) and Endangered Southern Resident Orcas are failing and costing billions in taxpayer dollars. There is no need to fund the CRSO/EIS process which would take too long. Army Corps of Engineers can supplement the 2002 Environmental Impact Statement promptly and use Alternative 4 to breach the lower 4 Snake River Dams this year."

Please tell the Army Corps of Engineers to supplement the 2002 EIS promptly and use Alternative 4 to breach the lower 4 Snake River Dams now! This would be a controlled hydraulic breach of the earthen embankment of Lower Granite, then Little Goose Dams (Alternative 4) starting this year."

"While I am aware of the Southern Resident Recovery and Task Force, the government efforts to save the Chinook Salmon (primary food source of) and Endangered Southern Resident Orcas are failing and costing billions in taxpayer dollars. There is no need to fund the CRSO/EIS process which would take too long. Army Corps of Engineers can supplement the 2002 Environmental Impact Statement promptly and use Alternative 4 to breach the lower 4 Snake River Dams this year."

For the latest updates, please join our "16,425 Days A Slave!” Facebook group: facebook.com/groups...

“Artifishal” (VIDEO) “Artifishal is a film about people, rivers, and the fight for the future of wild fish and the environment that supports them. It explores wild salmon’s slide toward extinction, threats posed by fish hatcheries and fish farms, and our continued loss of faith in nature.” www.patagonia.com/...

The Last Generation: Southern resident orcas in danger of extinction 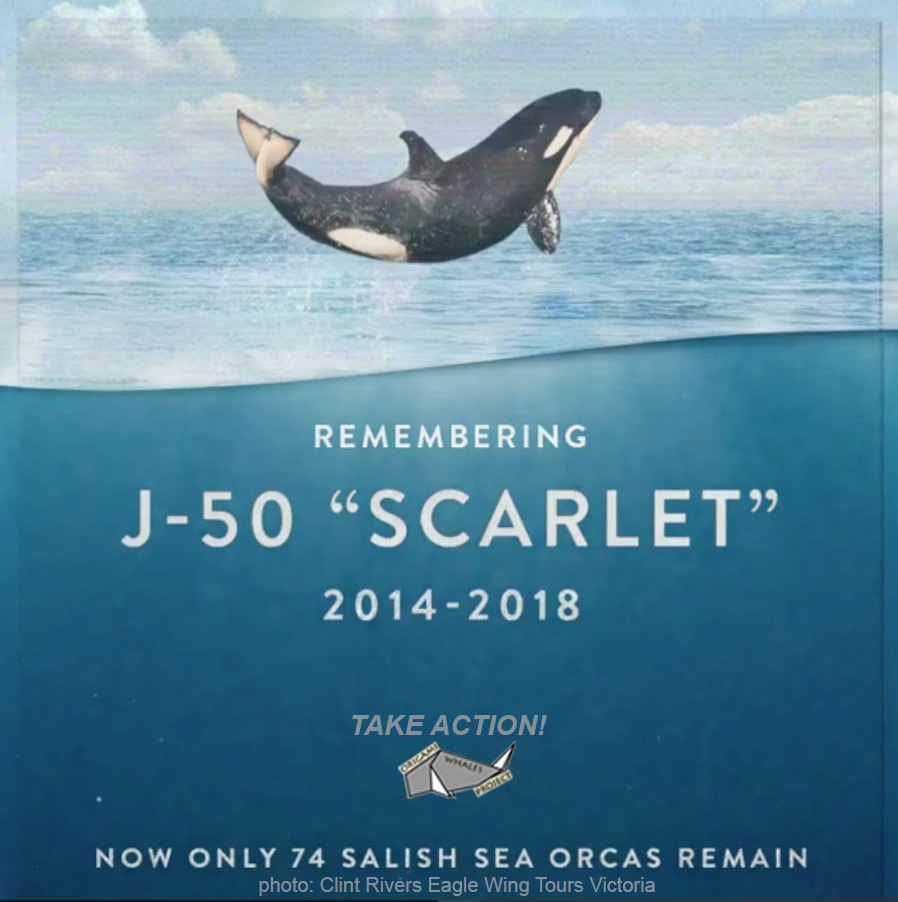 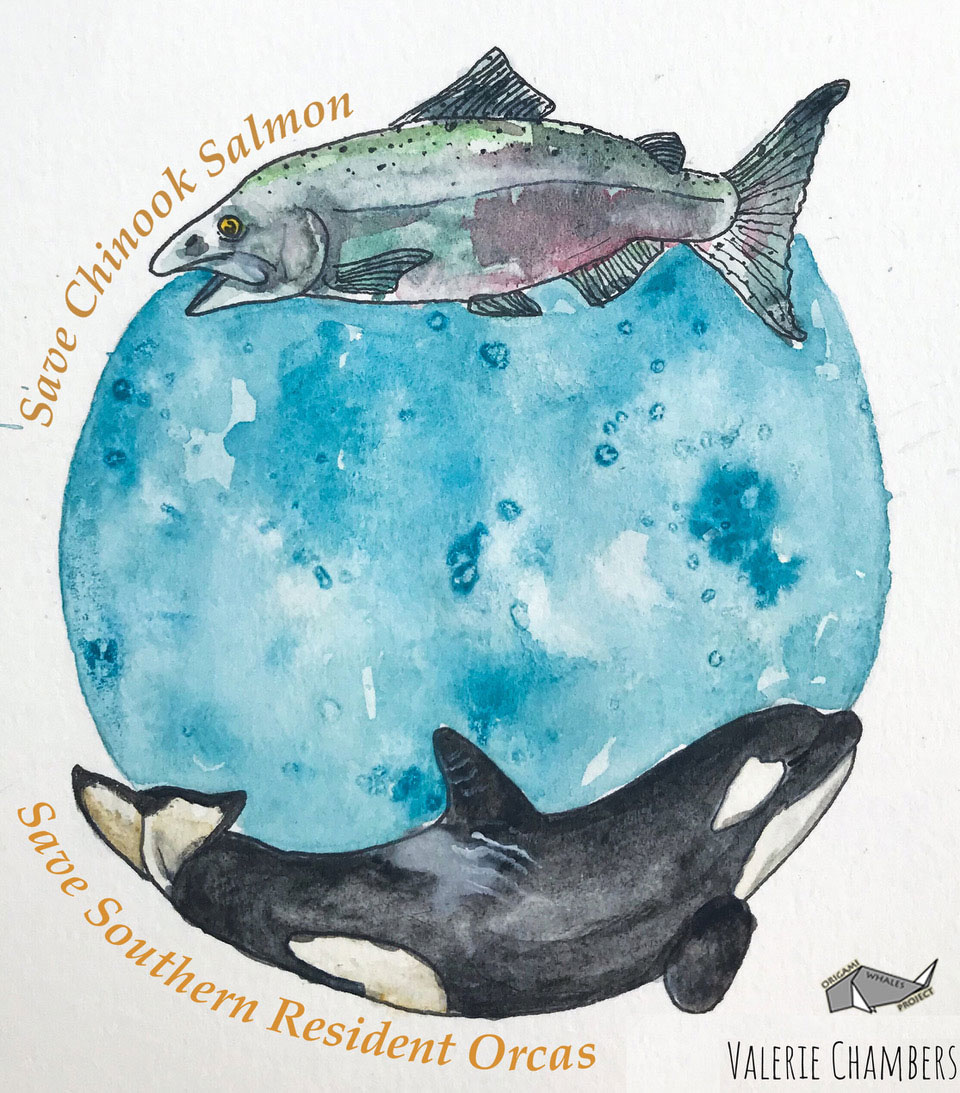