Kiska the Orca at Marineland, Niagara Falls needs your voice!

Kiska is a female Orca (killer whale) who was captured from Iceland roughly 40 years ago and has resided at Marineland, Canada in Niagara Falls Ontario ever since. She has birthed five calves there and all of them have died untimely deaths. The eldest of her calves, Athena living to the age of six. Kiska "lives" alone in a concrete tank and her physical and mental well being is of great concern as her physical and mental health deteriorate rapidly.

Please call or email Kathleen Wynne, Premier of Ontario this week and tell her:

The condition of Kiska the lone Orca at Marineland Niagara Falls is deplorable. I am writing to urge that you to take immediate action for the sake of Kiska's well-being.  On top of previous reports, and now this video "Kiska's Painful Teeth Irrigation" it is clear that she may be near death due the conditions under which she has been kept.

A former trainer at Marineland Niagara Falls, where Kiska is kept has stated: "Kiska was being 'abused and neglected'; that Marineland allowed Kiska’s physical condition to deteriorate for several months to the point of 'gushing blood'; does not employ enough staff to properly care for its animals; fails to 'make adequate provision for the safety' of the animals; keeps Kiska on constant medication; and rushes staff through their animal-care duties, with time allowed only to feed the animals with 'nothing more for their benefit'.”

With proper care, Kiska's health could be restored. More recently, sightings have been reported of a female Orca in the wild, named Granny, 103 years old.

I appreciate the Government of Ontario moving in the right direction by prohibiting the breeding, acquisition and possession of orcas (killer whales),

I believe Kiska should be included in the orca ban as she shares the attributes (such as her large size and her wide-ranging, deep diving, highly social lifestyle) as her wild counterparts. If she is not included in the orca whale prohibition ban, it will ensure she spends the rest of her life in social isolation.

Ontario should prohibit all whales and dolphins in captivity for the same reason,

Tens of thousands of Ontarians and millions of animal lovers around the world will see the Government of Ontario as compassionate and progressive if Bill 80 is amended to include Kiska and other whales and dolphins.

“Release Canada's only captive orca, Kiska to an appropriate facility.” 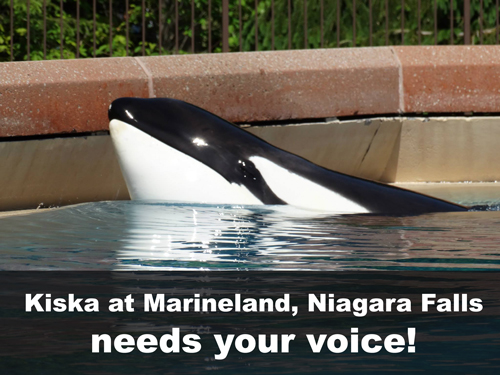